The Wizards was released in Early Access on Oculus Rift and HTC Vive. I haven’t played it on the Vive but the game has mixed reviews on Steam with 21 reviews. It’s sitting at 5 stars from Oculus Home, with 5 ratings. I’ve been playing it this week and personally I think it’s awesome. It isn’t perfect by any means but it’s also in Early Access so you can’t expect it to be. I just love the feeling of power that it gives me when I make certain movements and then magic happens. I was first given a taste of this sort of spell casting in The Unspoken and some of the spells seem ripped right from that game, but I like their execution better in The Wizards. 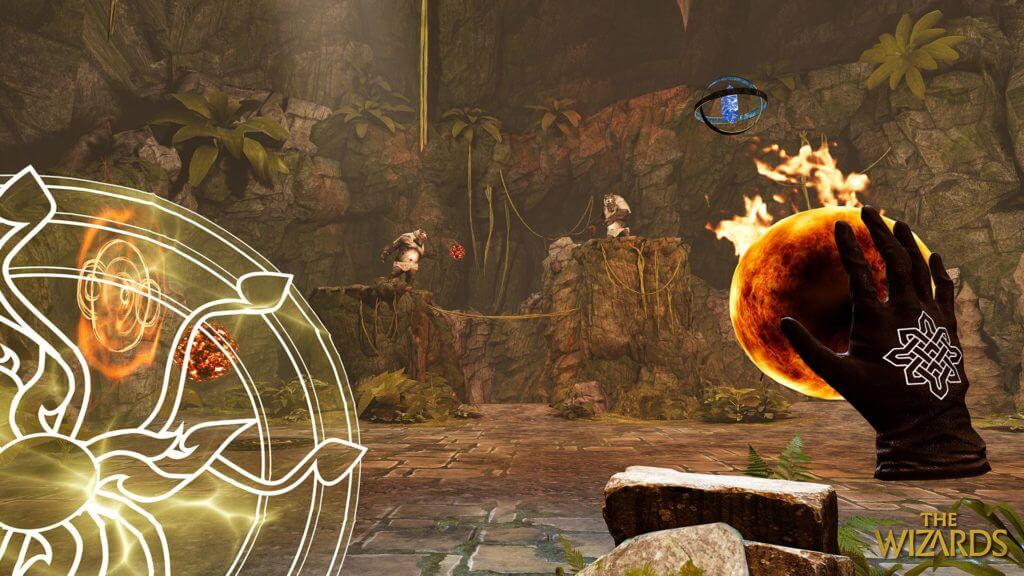 I just love the feeling of power that it gives me when I make certain movements and then magic happens. I was first given a taste of this sort of spell casting in The Unspoken, and some of the spells in The Wizards seem ripped right from that game, but I like their execution better in The Wizards. I love thrusting my arms downward, as if throwing magical energy from my core to my arms, and then seeing the purple crackle as the energy builds up in my fists. I love feeling it with the haptics as well. I love drawing a bow across my hand and then seeing it appear the reaching over my shoulder and grabbing an arrow, again with satisfying haptic feedback to let me know I’ve grabbed something. I love the action for producing a shield and how it can be done quickly so you can put an arrow in the face of the troll that’s about to whollop you while a fireball is an arms length away from melting your face and you can still get the shield out. But most of all, what I love about the mechanics of the magic in this game is how I got better with practice.

At first, I thought that the controls just weren’t very responsive. Sometimes they worked and sometimes they didn’t. I would die in battle after battle because I couldn’t get the damned bow to appear. And you can watch the livestream to see how long it took me to even be able to cast the magic missile spell. But I picked a spot with no bad guys and practiced and locked those spells into muscle memory and now I’m pretty consistent at casting the spell I want when I want. It’s like a fighting game. And I actually wish that it was, or at least had a multiplayer mode where you could fight against other wizards.

I know that The Unspoken is literally what I just said I wanted The Wizards to be but I want the spell casting and the bigger environments of The Wizards with the online multiplayer of The Unspoken. I don’t want to give up the story mode either. I’m greedy. I want it all in one game. And I’m sure I’ll get it one day. If not in The Wizards then in some other game. But for now, The Wizards is delivering one of the best, if not the best spell casting experiences that I’ve tried in VR.

Only last week I mentioned AltSpaceVR in a blog about the metaverse. Since then they have announced that they are going out of business. Pretty sure they are unrelated incidents. However, since then, it seems it might have a chance of staying in business thanks to Palmer Luckey. Things never stay dull for long in the VR community.

Should I try to save @AltspaceVR? (caveat: may not be possible)

In case something goes wrong with that tweet he is taking a poll on whether or not he should try to save AltSpace. I voted that he should even though I don’t use it much myself anymore because way back when I was part of the beta for AltSpace I was floored by it. Huge screens that you could watch videos with friends on, browse the web, play games, etc. I was immediately impressed with how it could make long distances between loved ones disappear as long as both users had a headset. My vote was a bit of a knee jerk reaction based on nostalgia.

Since then I’ve been hearing things about how AltSpace was being run. Far too many employees being paid far too much money for what they were doing. One person, who I wish I had thought to grab their name when I saw it, said that they were paid far too much to do far too little and that they wish they had been put to better use while there. I’ve also been hearing complaints that there hasn’t been a lot of development in the app since it launched. I feel like it’s changed a lot since launch, but then again, I haven’t used it all that much recently. Finally, there is the issue of pestering moderators. I’ve never experienced this issue outside of Reddit threads where people are complaining about it, but if the complaints hold water then it sounds a little too much like school, or being baby sat and with more than a handful of other options, why would people put up with that?

So, should Palmer try and save AltSpace? I don’t know. I don’t know if any of the stuff that I’ve heard is true, but if it is then saving AltSpace will take a lot more than just dumping in a pile of money into it and letting things continue as they have. And if AltSpace hasn’t been progressing and other programs are doing everything that AltSpace was trying to do, and doing it better, then maybe it would be more beneficial to VR as a whole to help them along instead. The part of me that voted yes is the part that remembers the exhilaration I felt after using it the first time, of rushing to Twitter and Facebook to tell the world that VR was going to bring people together even if they were a world apart. The sentimental part of me says to save it! I’m not ready for the Good Old Days to end. Of course I realize that the end of AltSpace is not the end of the Good Old Days but, at least for me, AltSpace is a part of the Good Old Days. So, should he? I don’t know. But I hope he does.