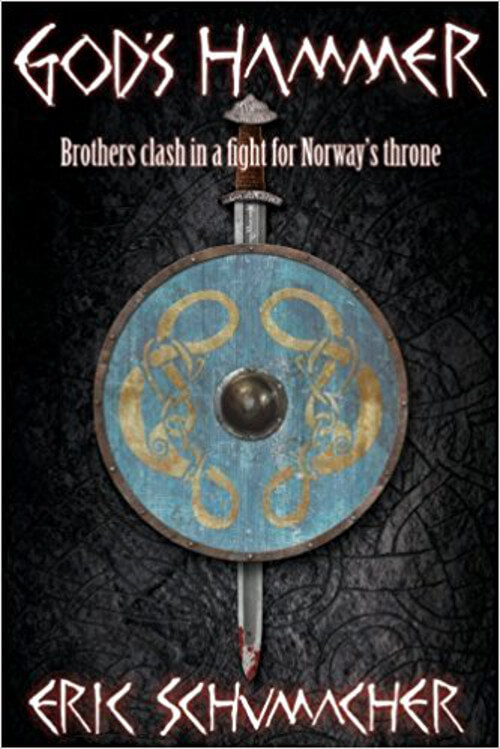 There are two things that this review will contain. The first is a warning for potential readers and the second is my abundant praise for this this journey that plunges you into the imagined saga of Haakon Haroldson. So if you do not wish to be warned about something that you may not have noticed had I not pointed it out or if you think that critical reviews should be negative, then stop reading.

The warning is this. Mr Schumacher has quite obviously done his homework for this book. In fact he has done so much work I hope he will receive some sort of degree in Norwegian History. Unfortunately for the reader Mr Schumacher uses historical terms when english terms will certainly be less disruptive to the story. It may be that after so much research the historic language has become normative for the author. Or perhaps he wants to convince the readers that he really has done his homework. Either way I did not enjoy the semi-regular assault on my suspension of disbelief. If that doesn’t scare you off then keep reading.

Now here comes the praise. From beginning to end the story of Haakon Haroldson did an amazing job satiating my desire for a medieval fantasy book. Like many people I am stuck waiting on both George R R Martin’s and Patrick Rothfuss’ next books, but fortunately I was rewarded by giving a historic fiction a chance. Most of you don’t know me personally but that is about as high a praise as I could give for a Historic Fiction which commonly suffers the problem of becoming unreadable.

Our adventure with Haakon begins when he is sent to be fostered with King Athelson of “Engla-Lond” in York. We see his new reality through the eyes of a boy who feels twice unwanted, his own father sent him across a sea and now he is forced to live as a pagan amongst Christians. For years he struggles with these two ugly realities until he eventually earns the love and respect of his foster father. Spurred on by this desire to please Athelstan he becomes baptised and grows quickly into a young man. He even is brought to war to see first hand the duties of a king. But this pivotal moment is interrupted with news of the death of his real father, Harold the Fair. Instead of riding into battle with his foster father he rides a ship to sail to the land of his father to rest a kingdom from his brother, who has already slain his other brothers.

Arriving in Norway Haakon wrestles with his new faith that now puts him at odds with the people he has come to rule. To further complicate things it becomes clear that all of his ‘loyal’ followers have agendas of their own. Haakon proceeds to make several unexpectedly wise decisions that win him respect and more fighting men. Unfortunately for Haakon, but fortunately for the book, he also makes several blunders that constantly threaten to unravel everything he is working for.

If you enjoy historical fiction or low fantasy this book is highly recommended. With another book about to be released you shouldn’t have to wait long either. Although fantasy readers may struggle with his overuse of historical names but if you can get past that you will see that Mr Schumacher stands ready to be a ‘Great’ in a world full of mediocre authors.

You can buy it here:

Nathan Swartz is Co-Host of ‘The Hoard’ and is Co-Founder of Transfigured Town Inc.